In the previous sections, I’ve explained how the Garífuna language went from a language spoken by the Kalípona Indians of St. Vincent to one that was acquired by a group of Africans living on the same island. The Kalípona language was an Arawak language influenced with Carib lexicon and affixes. When the Europeans started to infiltrate the Caribbean islands, the Spanish gave up on conquering the Lesser Antilles and left the English and French to fight over them. Father Raymond Breton was one of three Dominican French friars who lived in Guadeloupe and Dominica; although the indigenous did not permit European colonization, these friars were the first to be given permission to settle. Breton wrote a dictionary based on the Indian language that he called “the Carib language”, thinking it was one language with two registers. In later analyses by DeGoeje and Taylor, it was concluded that there was only one language spoken, but the language was Arawak, with a heavy influence of Carib lexical and morphological items.

At the point where the generation of Africans speaks the Kalípona language fluently as a first language, we see the birth of the Garífuna language. As the Garífuna population among the Kalípona Indians grew, they separated and went to live on the other side of St. Vincent, inviting some of the French to live among them. It is in this way that the Garífuna became bilingual in French, thereby keeping some of the French vocabulary in the Garífuna language. Even with the infusion of many French words into basic Garífuna vocabulary, with some Spanish and English words as well, does not make Garífuna a mixed language. The structure remains the same: it is an Arawak language.

This stage of development in Garífuna is more a cultural one than a linguistic one. At a time when Africans were making their first appearance on St. Vincent, other Africans were making their first appearance in the Kingdom of Guatemala. Pedro de Alvarado, on a reconnaissance mission from Mexico, entered into Maya country at the beginnings of the 1520s. The Kingdom of Guatemala included what is present-day Chiapas, Guatemala, Belize, Honduras, El Salvador, Nicaragua and Costa Rica. After two attempts to establish a capital in this kingdom, the Spaniards finally settled for what is today Antigua, Guatemala. The two-hundred Africans who accompanied Alvarado not only aided in the conquest of these new lands, but in the construction of Antigua’s fabulous churches and structures. It is unfortunate that the labor contributions by these Blacks are almost completely ignored in Guatemala; some would go as far as to deny it.

Over the next three hundred years, up to 22,000 Blacks would continue to come into Guatemala; some by legal means through Veracruz or Honduras, and some by clandestine measures. Sugar plantations sprouted up all over Guatemala whose workers were almost all African and African descent. Not only were there a large population of Blacks in Antigua, but Amatitlan, Esquintla, Reutalheu and also saw fairly large communities of Blacks. The biggest sugar mills were run by the Dominican religious order, especially the San Jeronimo mill in Baja Verapaz. The Archbishop Pedro Cortes y Larraz, in one of his visits to San Jeronimo in 1769, wrote that he witnessed about 700 African slaves working in this sugar mill. Thomas Gage, a Dominican priest, wrote about seeing Blacks from one end of Guatemala to the other. He especially noted that around the area of Lake Izabal seemed like an African village with hundreds of escaped Africans living in the mountains and coming down at night to steal food and provisions. He mentions that these Africans have no designs on hurting anyone, only defending themselves as necessary with bows and arrows.

The Caribbean coast of Guatemala and Honduras also became a very large haven for Blacks. In 1649 authorities in Guatemala City captured as many escaped slaves as possible to send them to help protect the coastline from British and Dutch pirates. The Spanish, realizing that machetes, bows and arrows were not enough protection, decided to build a fort in the town of Omoa and then later on Guatemala, the Castilla of Santo Tomas. With all of this construction, blacks were not only brought in from the interior of Guatemala and Honduras but hundreds of Blacks came in from Honduras and Puerto Rico as well. One of the more interesting cases was that of the French Blacks.

Around the 1790s, Haiti was experiencing its own problems. Jean-Francois “Papillon” Petecou had made a name for himself fighting for the Spanish side of the island, but later agreed to switch sides and fight for the French – provided the French ended slavery on the island. When the French took control of the entire island in 1795 and Toussaint L’Ouverture was named the leader, Papillon and his followers switched sides again to help the Spanish. In Spanish, he was referred to “el caudillo negro Juan Francisco” and his group is sometimes referred to as “los Negros Franceses”.

The French government in Haiti wanted to see the swift removal of Juan Francisco and soon he and his 800 followers boarded various ships in search of a place to live. In the end, 140 individuals went to Spain, 144 to Trinidad, 115 to Mexico, a small group to Florida and 307 ended up in Trujillo, Honduras. It was February, 1796. 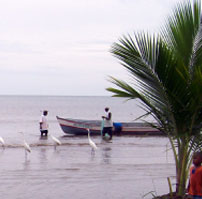 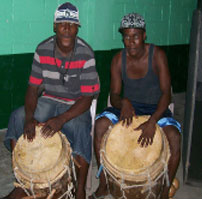 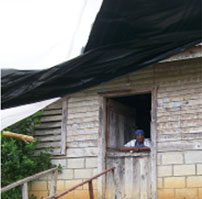 A reunion of sons and daughters of Africa

One can only imagine the glee among the Garinagu upon seeing so many Blacks in one area when they arrived in 1797. Not only were they Black, but like the Garinagu, they spoke French. By that time, almost nothing about the Garinagu signaled they were of African descent except for their appearance. The Garinagu spoke an indigenous language and lived the indigenous culture. Over the next few generations, the Garinagu would intermarry with these Blacks, adopting many cultural practices such as religion, food, music and belief systems. Nancy Gonzalez has compared Garífuna culture to many West Indian groups, and has found several striking similarities. As the Garífuna left Trujillo and migrated north into present-day Belize, they would have met with Jamaican Blacks who had been shipped there to work in the logging industry. Some Garinagu migrated as far south as Nicaragua, and possibly to Costa Rica and Panama.

Depending on where they settled, the Garífuna language would have been impacted and influenced in different ways. For example, the Garínagu in Belize would have had much more contact with English and Black Jamaican speakers due to the industry in that area. In Guatemala, Garífuna language would be influenced mostly by Spanish. In Honduras, with many isolated Garífuna settlements, much of the archaic vocabulary would have stayed in the language. In time, four distinct varieties of Garífuna developed: Belizean Garífuna, Guatemalan Garífuna, Honduran Garífuna and Nicaraguan Garífuna. Later, with migration to the United States, another variation developed, American Garífuna. If you ask any Garífuna, he or she can tell within seconds of speaking to a Garífuna if they grew up speaking in any of these four regions. 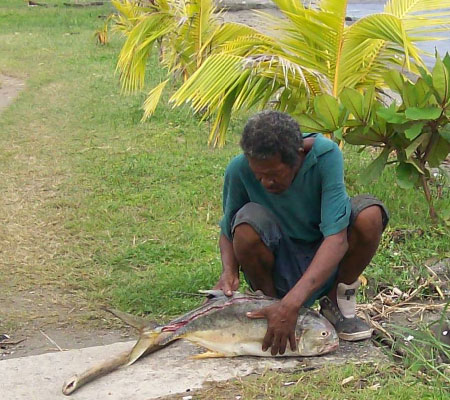 The spectacular story of Garífuna settlement in Guatemala

The story of settlement in Guatemala deserves much more attention that it has received; it is my hope that with the publishing of the full details of my research, more people will know about their story and eventually the Garífuna in Guatemala will be given their due respect in their country.

The area of Livingston had originally been inhabited by the Sarstun group, Chol-speaking Maya Indians. Christopher Columbus himself passed through this area; one of his chroniclers mentioned that Columbus passed by the Cape of Higueras, which is the present-day Amatique Bay. The Spanish, who had already conquered the center of the country (Antigua), had tried to conquer regions surrounding the Peten, but like the Kalínago, the indigenous groups resisted. Some Indians were even forcibly removed from the area and taken to Mexico. By the time the Blacks had arrived to this area, it had already been abandoned for quite some time. The Qeq’chi Indians, who currently claim to be the original inhabitants of Livingston, did not start arriving until the early 1900s.

It is well known and documented that French-speaking Blacks from Haiti arrived in Trujillo, Honduras and eventually mingled with Garífuna individuals. Oral tradition passed down through generations state that Garífuna settlement in Guatemala is owed to Marco Sanchez Diaz in 1802. It is said that Sanchez Diaz was a French Black from Haiti, however, many believe this to be nothing more than a wonderful and exciting legend. Nancy Gonzalez has also mentioned this in her publications, implying that this story may be just that, a story. Fortunately I can shed light on this “story” and lend credibility to what had been buried with the first Garínagu to settle Livingston. While living in Guatemala and during one of my many trips to the National Archives of Central America I came across a document that listed the names of each one of the French Blacks to disembark in Trujillo. Among them, on the very bottom of the first page of the three-page list, is the name of Marco Antonio, a Lieutenant in the French brigade from Haiti. I believe this to be the very same Marco Antonio Sanchez Diaz, the Garífuna founder of Livingston.

A few decades later, in 1857, about three thousand East Indians (from India) arrived in Belize (then British Honduras) to fill in the gap left when slavery was abolished. Many of them, Hindus and Moslems alike, eventually made their homes in Livingston. Later in 1884, the International Railroad Company of Central America started to ship African-Americans from the United States to coastal Guatemala to work on the building of a railroad. Some of them chose to stay in Livingston instead of returning to the United States. In the beginning of the 1900s, the Qeq’chi Indians started to move east from the Verapaces into Izabal. It was not long before Livingston became the most multi-cultural area in all of Guatemala.

Without a doubt, the Garífuna language would have experienced contact and influence from a variety of different languages, but the Garínagu have held strong to the language, guarding it almost jealously. I have chosen 1985 as an ending date for this stage of Garífuna language since it marks the end of an era in which many Garínagu refused to acknowledge their African heritage. Nancy Gonzalez has written that some Garínagu in Livingston referred to an albino family as proof of the Garinagu’s White heritage. One Garífuna author even published a Garífuna history book in which he states that the Garífuna should be proud of their Carib ancestry and that the Garínagu who chose to speak the language of African descent Blacks were only poisoning and contaminating the Garífuna people. In the next section, I explain what may have been the catalyst.